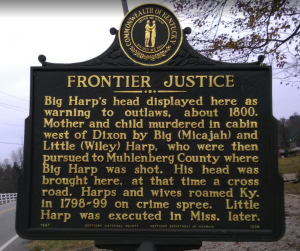 On a summer’s day in 1799, a group of men were driving cattle from Kentucky to Virginia, along a road known as Boone’s Trace, when the cows suddenly quit the road and rushed into the woods. Once the men had rounded the beasts up, they went to see what had spooked them. In a ditch at the side of the road was the bloody corpse of a man who had been brutally assaulted some days before.

The drovers took the body to a nearby public house on the Rockcastle River, where it was recognized by the innkeeper as that of a Mister Langford, a young gentleman from a respectable family in Mecklenburg, Va. The innkeeper told the local lawman that Langford had stayed in the tavern a few nights before, on his way to Kentucky. He was a good-natured man, the innkeeper said, and generous too. When a poor family – two brothers named Harpe and their wives – had stopped at the inn at breakfast, Langford had paid for their meal.

And then he left with them.

The Harpe Brothers were pursued, and run to ground in a place called the Crab Orchard. They were brought to Danville, Ky for trial, but they escaped west, to a town called Henderson on the Ohio River, in an area which had only recently been settled. There they embarked on a brief but brutal reign of terror. “They murdered every defenseless being who fell in their way, without distinction of age, sex or color,” wrote Judge James Hall in his book Letters from the West, in 1832. He described the Harpes staking out isolated farmhouses, waiting for dark, and then falling on the inhabitants, killing them all and burning the houses afterwards.

But they rarely stole, Hall wrote. “Neither avarice, want, nor any of the usual inducements to the commission of crime seemed to govern their conduct.” Instead it seemed that their only motive appeared to be what he called “A savage thirst for blood, a deep-rooted malignity against human nature.”

Were the Harpes the first American Psychos? Probably not, but this is the first documented account that I’ve found of men in America murdering apparently for kicks, rather than for revenge or advancement, or out of anger. The Harpes quickly became notorious in Western Kentucky, thanks to their shocking brutality and the careless nature of their crimes. They murdered an African American boy for no apparent reason, breaking his head open on a tree trunk, then leaving him to die, but not taking his mule or the bag of corn it carried. They terrorized the local tavern owners and shopkeepers, and lived in the woods with vagrants and beggars. They were able to get away with their murder because the area they operated in was a wilderness in 1800, and there were no lawmen to speak of.

But the people of Kentucky were on alert. They locked up their wives and daughters and armed themselves. And when the Harpes went on one particularly stomach-churning killing spree, the locals put together a posse to hunt them down.

The spree started when the Harpes killed a local landowner, stole his horse and stalked a pair of travelers through the area to the house of a Mr and Mrs Stegal. Mr Stegal was not at home, but the wife gave the travelers a bed. The Harpes murdered both travelers and Mrs Stegal and set fire to the house. They escaped in the rain and rode hard into the wilderness. When they came across a woodsman who was looking for his horse, they killed him, too.

By now the Governor of Kentucky had heard of the Harpes and put a price on their heads. A man named Leiper assembled a group of townspeople, including the unfortunate Mr Stegal, and went after the brothers. The posse surprised the Harpes in the woods, and after a brief but hurried pursuit on horseback, Leiper shot and wounded the older brother, Micajah. The wound was mortal, but Harpe made a full, prideful confession of all of his crimes before he died. The only killing he showed any qualms about was the murder of one of his own children, whom he killed for making too much noise, he said.

Stegal arrived just as Harpe died, and cut off his head. The head was taken to a local magistrate, and stuck on a pike at a crossroads to deter other bandits. The head is long gone, but a monument to Harpe’s Head remains at the site today.

The other Harpe ran to Natchez and teamed up with another bandit crew, preying on travelers along the Ohio River. He rode with them for a while, and then killed the gang’s leader, cutting off his head and taking it to a local magistrate for a reward. Unluckily for him, he was recognized, and was arrested, condemned and executed.

This website uses cookies to improve your experience while you navigate through the website. Out of these, the cookies that are categorized as necessary are stored on your browser as they are essential for the working of basic functionalities of the website. We also use third-party cookies that help us analyze and understand how you use this website. These cookies will be stored in your browser only with your consent. You also have the option to opt-out of these cookies. But opting out of some of these cookies may affect your browsing experience.
Necessary Always Enabled
Necessary cookies are absolutely essential for the website to function properly. This category only includes cookies that ensures basic functionalities and security features of the website. These cookies do not store any personal information.
Non-necessary
Any cookies that may not be particularly necessary for the website to function and is used specifically to collect user personal data via analytics, ads, other embedded contents are termed as non-necessary cookies. It is mandatory to procure user consent prior to running these cookies on your website.
SAVE & ACCEPT
The Mystery of Marketing – The newsletterArticles, Branding, Business, Education, fiction, Marketing, Non-fiction, research, Writing
America’s First MurdererArticles, books, crime, history, Murder, non fiction, Non-fiction, research, Writing