The Devil’s Half Mile is up for an Audie! 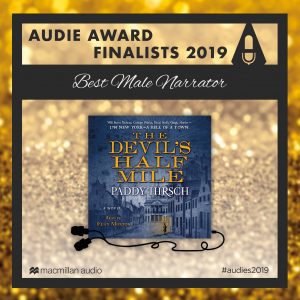 I got the great news this week that The Devil’s Half Mile has been nominated for an Audie Award, for best male narrator.

The book was narrated by Euan Morton, who, if you don’t know, is a highly accomplished stage actor. He has way too many credits for me to list here, so I’ll leave it to Wikipedia to fill you in, but perhaps the most notable credit, as far as TDHM is concerned, is his time as King George in the Broadway musical Hamilton.

I was surprised and delighted last year, when Macmillan Audio told me that Euan was going to read my novel for the audiobook. But I was stunned by the result. He really does a spectacular job. So good, in fact, that he has changed the way I think about some of the characters myself. When I read the book aloud at events, I often find myself reading the way he reads, and using the voices that he uses in the audiobook. It’s quite an experience.

Yikes! Regardless, it would be an honor to be on the same list as any of those writers, so I count myself very fortunate to have a publisher as supportive as Macmillan Audio, and a collaborator as talented as Euan Morton.

A lot of people have asked me why I didn’t read the book myself. I did think about it. I even suggested it at one point, but I’m so glad Macmillan Audio politely ignored me. I can see why now. I’m not an actor, for one thing, and Euan’s performance shows how much an actor can add to the text. And I’m pretty certain the book would not have made the Audie nominations list if I’d been reading.

If you haven’t heard the audiobook, it’s well worth a listen. Available at all the usual places, of course, but if you have an Audible account, you can listen there. Also, if you’d like a taster of Euan’s read, check out this excellent story map of New York, based on the book. Click and listen!

This website uses cookies to improve your experience while you navigate through the website. Out of these, the cookies that are categorized as necessary are stored on your browser as they are essential for the working of basic functionalities of the website. We also use third-party cookies that help us analyze and understand how you use this website. These cookies will be stored in your browser only with your consent. You also have the option to opt-out of these cookies. But opting out of some of these cookies may affect your browsing experience.
Necessary Always Enabled
Necessary cookies are absolutely essential for the website to function properly. This category only includes cookies that ensures basic functionalities and security features of the website. These cookies do not store any personal information.
Non-necessary
Any cookies that may not be particularly necessary for the website to function and is used specifically to collect user personal data via analytics, ads, other embedded contents are termed as non-necessary cookies. It is mandatory to procure user consent prior to running these cookies on your website.
SAVE & ACCEPT
How bookstores can cope with rising rentsArticles, books, Branding, Business, Case Study, Economy, Explainer, Interviews, Writing
How to market your book, part 1Articles, books, Branding, Education, Explainer, fiction, Marketing, writing, Writing