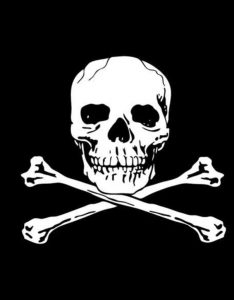 That got your attention!

I’ve been writing a guest blog post about pirates for about a month now. It’s not supposed to be a long post, but the pirate world is quite irresistible. I’ve gotten lost researching pirates on the Internet a few times – call it the Bermuda Triangle of the Web – but mostly I’ve been relying on a couple of excellent books, The Pirates Pact, by Douglas Burgess, and Pirates, by Peter Lehr.

Lehr gives a kind of overview of piracy, from the marauding Vikings of mediaeval times, to the present day ship-snatchers of Somalia. Burgess, on the other hand, focuses on the piracy that dominated the late 1600s and early 1700s, when pirates sailed from the Eastern seaboard of the American colonies to the Red Sea. By and large, these sea captains sailed initially as privateers, given a commission by a governor of one of the colonial provinces to harass the enemies of the Crown within certain geographical bounds. Most of them, however, headed straight to Madagascar and the Red Sea, to prey – illegally – on any shipping that didn’t fly an English flag.

The governors were entirely complicit in this deception, knowing full well that the privateers would turn pirate as soon as they left port, even though the English government in London was becoming increasingly opposed to piracy at the end of the 17th Century. Why would the governors thumb the noses at the Crown? Simply because the most successful of these pirates returned with their ships brimming with gold and silver and other precious goods. The gold and silver they were expected to share with their sponsors; the other goods they sold on the wharves of New York and Newport, RI, – tax free of course.

There were a lot of pirates about in those days, far too many for me to include in the post. One notable omission I made was Captain William Fly, who had a short and remarkably unsuccessful pirating career, but who is notable because his demise marked the end of the Golden Age of piracy. Here is his story:

On the night of the 27th of May, 1726, a sailor named Maurice Condon was manning the wheel of the ship Elizabeth, en route to Guinea from Jamaica. The sea was calm, but the ship was not so quiet that Condon could hear the group of four sailors that crept up from the hold and surrounded him. One of them put a pistol to his head and told them that if “he uttered a syllable, or stirred hand or foot, he would blow [Condon’s’] brains out on the spot.” Condon froze.

The man with the gun was William Fly, a mysterious fellow who had signed on as bosun just before the voyage. The word was that he had been a pirate before, sailing with one of the many buccaneer ships that harried vessels throughout the West Indies. But no-one knew much about him. Now it seemed, his purpose was clear. he had spent the first few days at sea sounding out the rest of the crew, to see which of them would join him in taking the ship. When he had enough supporters, he struck.

Fly left a sentry with Condon and then went to the Captain’s cabin. John Green awoke to find a sword at his throat and Fly looming over him the dark. Fly told Green that his commission was over, and that he could either come quietly, or be stabbed to death in his bed. Green pleaded with him, whereupon Fly dragged him up on deck, and threw him over the side. Green, flailing, managed to grab hold of the mainsheet and stop himself from falling. But Fly took one of the axes used to cut away ropes and debris in a storm, and cut off Green’s hand. The Captain dropped into the sea and disappeared.

Thomas Jenkins, the mate, was next to go. He struggled with his captors, but Fly subdued him with a blow from the axe that nearly took off his shoulder. Then he had Jenkins thrown over the side.

Once he had established himself, by locking some of the crew up and persuading the rest to seek their fortunes with him, Fly turned the Elizabeth north, towards North Carolina. On his arrival, he encountered a sloop, the John Hannah, which he attempted to capture and plunder. He subdued the ship’s captain, but ran the sloop aground on a sand bar and sank it. Frustrated, he then went after another ship, called the John and Betty. After a brief pursuit, he raised the black flag, fired on the ship and boarded it, only to find there was very little to plunder, other than a seaman named Atkinson, who knew the coast and was persuaded at gunpoint to join Fly on board the Elizabeth.

Fly next turned the Elizabeth north towards Delaware, where he boarded a passenger ship, but found it just as empty of treasure as the John and Betty. He ordered the ship north again, this time to Martha’s Vineyard. But Atkinson purposely overshot and took them to Nantucket instead. Fly was furious, and was about to shoot him dead on the spot when the rest of the crew interceded, telling Fly they needed a man who knew the local waters if they were to have any chance of success.

Fly grudgingly agreed, and they set off again. The Elizabeth proved to be a slow sailor, however, not the kind of ship that made for good piracy. So, when they arrived at Brown’s Bank a few days later, and managed to capture a fast fishing schooner, Fly put several of his men aboard it and set them off after another ship that came close enough for them to consider pursuing as a prize. He remained on the Elizabeth with Atkinson, who had been ingratiating himself with three members of the crew. Atkinson was watching the pursuit of the ship with a telescope and offered it to Fly. Fly put his weapons down to hold the glass, and Atkinson struck, taking the pistol and sabre, and turning them on Fly himself. The sailors that Atkinson had befriended subdued Fly, who was taken below and put in irons. Those men who still supported Fly were also locked up, and the Elizabeth turned towards Boston, where they landed on June 28.

In the late 1600s, the ports of New England had thronged with pirates and privateers, many of whom were gentlemen, respected traders and pillars of the community. Ships’ captains accused of piracy in those day were often pardoned – even the notorious Blackbeard was pardoned, by Governor Eden of South Carolina – and only the unlucky or the egregious were hanged. The colonists often felt sorry for men who were forced by circumstance to resort to piracy, so it’s a mark of how times had changed by 1726 that it took the legal system just six days to dispense with William Fly and his cohort. On the Fourth of July, they were found guilty of murder and piracy, and hanged in chains.

This website uses cookies to improve your experience while you navigate through the website. Out of these, the cookies that are categorized as necessary are stored on your browser as they are essential for the working of basic functionalities of the website. We also use third-party cookies that help us analyze and understand how you use this website. These cookies will be stored in your browser only with your consent. You also have the option to opt-out of these cookies. But opting out of some of these cookies may affect your browsing experience.
Necessary Always Enabled
Necessary cookies are absolutely essential for the website to function properly. This category only includes cookies that ensures basic functionalities and security features of the website. These cookies do not store any personal information.
Non-necessary
Any cookies that may not be particularly necessary for the website to function and is used specifically to collect user personal data via analytics, ads, other embedded contents are termed as non-necessary cookies. It is mandatory to procure user consent prior to running these cookies on your website.
SAVE & ACCEPT
The First American Psychos?Articles, books, Case Study, Education, history, Murder, Non-fiction, Uncategorized, Writing, writing
Hudson’s Kill goes on the roadUncategorized