Murder in the first degree – a history 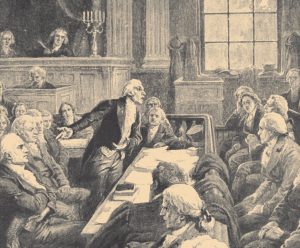 I had always thought of ‘murder in the first degree’ as something dating back to mediaeval times in England. It certainly has that ring to it. But it turns out, it’s not an ancient concept at all, nor is it English.

The idea that there are degrees of murder, and consequently different punishments for each degree, is an American one. It dates back to the turn of the 19th Century, the period that my novels The Devil’s Half Mile and Hudson’s Kill are set in. Which is very convenient!

In the years after the Revolutionary War, the United States were feeling their way, legally. The states didn’t want to adopt wholesale the same system of repressive archaic laws that England lived under: they had just fought a war to throw off the English yoke, after all. But they did need a framework. So the states picked and chose, which meant that there was some familiarity in each state’s system, but also some big gaps and some big changes.

When it came to criminal law, reformists steered the way, in many cases. The more enlightened framers of the states’ legal systems were generally not in favour of bloodthirsty criminal codes, which treated murder, rape, theft and forgery equally – usually with the death penalty. Reformers wanted the punishment to fit the crime. A great many were not in favour of capital punishment at all. As the New Hampshire constitution of 1784 put it: “[A] multitude of sanguinary laws is both impolitic and unjust. The true design of all punishments being to reform, not to exterminate, mankind.”

Taking another human life was regarded as by far the worst of all crimes (unless, appallingly, that human being happened to be a slave), and in 1794, Pennsylvania enacted an important, innovative law about murder.

“…several offenses, which are included under the general denomination of murder differ … greatly from each other in the degree of their atrociousness,” the Pennsylvania statute read, and then went on to distinguish between two different “degrees” of murder. Murder “in the first degree” was murder “perpetrated by means of poison or by lying in wait, or by any other kind of wilful, deliberate or premeditated killing, or which shall be committed in the perpetration or attempt to perpetrate any arson, rape, robbery or burglary.”
A History of American Law, Lawrence Friedman

Lawrence Friedman notes in A History of American Law that it didn’t take long for this idea to catch on. Virginia adopted the concept almost immediately, Ohio followed in 1824, New York changed its laws accordingly in 1827 and Missouri fell into line in 1835.

It turns out that the concept of degrees of murder didn’t make its way across the Atlantic for nearly 200 years. In the UK, there were only two classifications for taking a human life: murder and manslaughter. Then, in 2004, the Law Commission published report that concluded the law on murder was “a mess”. A review followed, and in 2006 a three tier classification of homicide was proposed, creating first and second degree murder charges, as well as manslaughter. The ladder system would allow a distinction between intention to kill (mandatory life sentence) and intention to grievously harm with a “serious risk” of death (discretionary life sentence). The second degree case would also include certain cases involving diminished responsibility, provocation or suicide pact.

This website uses cookies to improve your experience while you navigate through the website. Out of these, the cookies that are categorized as necessary are stored on your browser as they are essential for the working of basic functionalities of the website. We also use third-party cookies that help us analyze and understand how you use this website. These cookies will be stored in your browser only with your consent. You also have the option to opt-out of these cookies. But opting out of some of these cookies may affect your browsing experience.
Necessary Always Enabled

Any cookies that may not be particularly necessary for the website to function and is used specifically to collect user personal data via analytics, ads, other embedded contents are termed as non-necessary cookies. It is mandatory to procure user consent prior to running these cookies on your website.