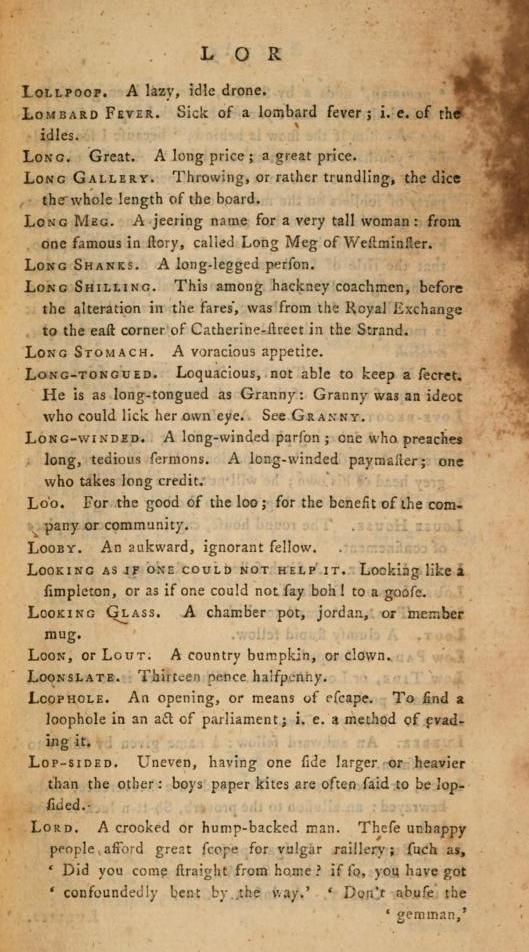 One of the great joys of writing historical fiction is learning the language of the time. And the sweary stuff in particular.
I’m writing about early 19th century characters, so my go-to is a cracking wee book called A classical Dictionary of the Vulgar Tongue, by one Francis Grose. As Wikipedia puts it,

Though intended to amuse, they give an unusually vivid picture of the speech of the day which would not normally find inclusion in standard dictionaries, and contained, in all, about 9,000 terms which more scholarly works of the time habitually overlooked.

I’d love to know just how Mister Grose managed to compile this dictionary. No doubt he spent lots of time in taverns and houses of ill-repute (or pushing schools, as they were called. Or fencing schools, or nanny-houses, or vaulting-houses, or abbeys. You see? So much color! So much fun!).

But onto the insults. People really knew how to slag each other off in those days. They used a lot of the terms that we use today – bastard was a favorite. And there was much use made of genitalia. But a lot of the slurs might leave us scratching or heads…

An Athanasian wench – a forward girl
A Ralph Spooner – A fool
A rum cully – a dupe
A Tyburn blossom – A young criminal, destined for the gallows
A dromedary – a heavy, oafish man
A gundiguts – a fat man
A swill tub – a drunkard
A foreman of the jury – a man who likes the sound of his own voice
Jack Nasty Face – a common sailor
A lolpoop – a lazy, idle drone
A gilflurt – a proud, vain woman
A mongrel – a sponger
A duke of limbs – A tall, awkward fellow

And my personal favorite….

A gentleman of three outs – that is, without money, without wit and without manners.

Still looking for the perfect place to fit that one!

This website uses cookies to improve your experience while you navigate through the website. Out of these, the cookies that are categorized as necessary are stored on your browser as they are essential for the working of basic functionalities of the website. We also use third-party cookies that help us analyze and understand how you use this website. These cookies will be stored in your browser only with your consent. You also have the option to opt-out of these cookies. But opting out of some of these cookies may affect your browsing experience.
Necessary Always Enabled
Necessary cookies are absolutely essential for the website to function properly. This category only includes cookies that ensures basic functionalities and security features of the website. These cookies do not store any personal information.
Non-necessary
Any cookies that may not be particularly necessary for the website to function and is used specifically to collect user personal data via analytics, ads, other embedded contents are termed as non-necessary cookies. It is mandatory to procure user consent prior to running these cookies on your website.
SAVE & ACCEPT
Bad cops: good storiesUncategorized
It’s all in their headsArticles, crime, fiction, psychological crime fiction, writing