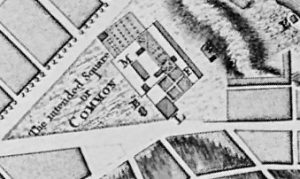 City Hall Park is one of those rare quarters of New York – a green space that has remained green since it was first laid down by the city planners. You can see quite clearly from the four maps on this page that it has barely changed configuration over the years, taking up almost exactly the same space as it does today. The illustration on the left is a detail from Montresor’s famous map of Manhattan, surveyed in 1775. The southern part of the space, which is now occupied by a little park and the Jacob Mould fountain (see below), is described as “the intended square or Common,” so I guess it might not have been landscaped in 1775. The following year, however, people gathered there to hear George Washington read the Declaration of Independence. 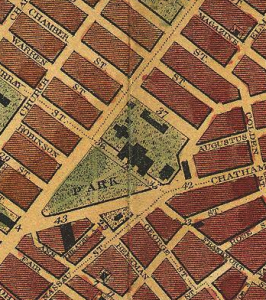 The northern part, which is where City Hall is located today, was comparatively crowded in the early 1800s. In the detail from the map on the right, dated 1807, you can see four buildings in the park, each of which is numbered. Working clockwise from the top of the park, the first building looks like an upended square bracket, located on the south side of Chambers Street and numbered 37. This is the old Almshouse. In 1775, it was a soldier’s barracks. Today it’s the site of the Tweed courthouse and the headquarters of the New York City Department of Education.

Next, on the far right, is a rectangular building, shaped a bit like an upside-down square medicine bottle, numbered 35. On the Montresor Map it’s marked L. This was the Gaol, also known as the debtors’ prison. It’s where William Duer, one of the principal architects of America’s first financial crisis, the Panic of 1792, was imprisoned. In my novel The Devil’s Half Mile, Justy Flanagan visits the Gaol in the hope of speaking to Duer about Justy’s father’s murder. But he is too late. Duer died on May 7, 1799. He was still under sentence, but the warden of the jail allowed him home to pass away with his family around him. The rectangular building marked 42 was the city arsenal.

Next up, still going clockwise, is the large building in the center of Murray Street where it crosses the park. You can just about see the number 50 under it in the map on the right. On the Montresor map it’s a different building entirely; a long block marked M. Back in 1775, it was a workhouse. Today the site is occupied by the City Hall. 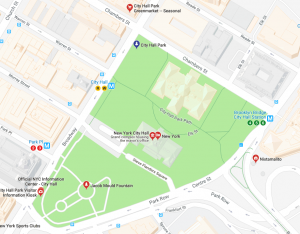 On the 1807 map, on the right, it’s called the “New Court House”, although when this map was made, the building wasn’t even close to completion. The cornerstone was laid in 1803, but construction was halted for years, as the project was considered too expensive. It took until 1812 before the building was opened for business, and the seat of city government moved up from the old Federal Hall at Wall and Nassau.

The last building, set back from Murray Street and shaped like a cross, is numbered 36 on the 1807 map (above, right). This was the Bridewell Prison, which was completed at the end of the Revolutionary War, and remained the main city prison until 1838. The Bridewell was demolished, and its stone used to build the New York Halls of Justice, also known as the Tombs.

One note about the 1807 map. If you click on the link to look at the full map, you’ll see its entitled A Plan of the City of New York with the recent and intended improvements… In other words, it’s highly speculative. By 1807, New York had only extended a few blocks north of Chambers Street, Canal Street was at best a muddy stream, and the area north east of the Common a large freshwater pond.

In the late 1700s, as immigration to America began to ramp up, New York’s government realised it needed a plan to grow the city, and fast. In 1797, the Common Council commissioned surveyors Casimir Goerck and Joseph Mangin to draw up a plan for the extension of the city northward, and the development of the entire island of Manhattan. Goerck died of fever, but Mangin finished the plan on his own, and presented it in 1801.. The plan was initially accepted by the Council, but then politics intervened, with Aaron Burr leading a campaign to discredit Mangin’s map as speculative. The plan was rejected, the map was withdrawn and copies were marked with a warning of “inaccuracies” in one particular area.

But Mangin’s map lived on. The 1807 map I’ve linked to above was a plagiarism by a man named William Bridges. He simply replicated Mangin’s grid and slapped his name on it. And when the New York City Commissioner’s Plan for the development of Manhattan was finally revealed in 1811, it looked suspiciously similar to Mangin’s original. In fact the area of the plan which the Common Council had warned was inaccurate and speculative was accepted wholesale by the Commission.

This website uses cookies to improve your experience while you navigate through the website. Out of these, the cookies that are categorized as necessary are stored on your browser as they are essential for the working of basic functionalities of the website. We also use third-party cookies that help us analyze and understand how you use this website. These cookies will be stored in your browser only with your consent. You also have the option to opt-out of these cookies. But opting out of some of these cookies may affect your browsing experience.
Necessary Always Enabled

Any cookies that may not be particularly necessary for the website to function and is used specifically to collect user personal data via analytics, ads, other embedded contents are termed as non-necessary cookies. It is mandatory to procure user consent prior to running these cookies on your website.