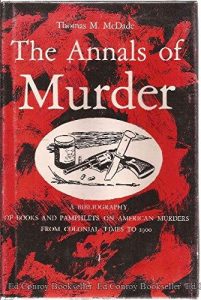 “As far as I can tell, the first murder in New England was committed in 1630 with a gun.” Thomas McDade, The Annals of Murder.

John Billington was probably not the first man to commit murder in New England. There must have been unlawful killings by Native Americans long before 1630. And who knows what happened between settlers and natives – not to mention amongst the settlers themselves – as the newcomers to America hacked out their territory. But Billington was the first man to be convicted in the colony, which makes him America’s first official murderer – and the first man to hang for the crime.

Billington was executed for the killing of John Newcomen, who had recently arrived in the colony. In the documentation that survives, there’s nothing to suggest motive for the murder. Billington “waylaid” Newcomen in the woods, and shot him to death, according to a memoir by William Bradford, who was Governor at the time, and who passed the sentence of death. That makes Billington sound pretty cold, but a few years later, a trader named Thomas Morton wrote in The New English Canaan that Billington “was beloved of many.” He implied that Billington “took aim against Newcomen with regret”, and suggested that the shooting of Newcomen might have been somewhat justified.

Is that the sound of a plot, thickening? Billington was a controversial subject. He sailed to America on the Mayflower, but he was not a strident supporter of the Puritan leaders in charge of the expedition. He’s believed to have been a Catholic, which would not have made him popular on board, and from the outset he appears to have been a bit of a troublemaker. He was part of a mutiny on the crossing, and his son, John Jr, nearly blew the ship up when he discharged a weapon beside a barrel of powder. When he arrived in America, Billington refused to be pressed into military service, and he was rumoured to be involved in a plot to overthrow the religious government of the colony – although he was never charged.

Billington was not beloved of the powers that be in New England – including Governor William Bradford, who called him a “knave” in one letter, and in another called the Bilingtons “one of the profanest families”. The family was certainly notorious. One daughter, Eleanor, was locked in stocks, whipped and fined five pounds for slander. Another family member was whipped for fornication. In light of the family’s unpopularity, and the lack of documentation regarding Billington’s court appearances, you might be tempted to wonder whether the investigation of the shooting and the subsequent trial were all above board. It’s good to know that America’s first official murder might also mark the country’s first political conspiracy!

This website uses cookies to improve your experience while you navigate through the website. Out of these, the cookies that are categorized as necessary are stored on your browser as they are essential for the working of basic functionalities of the website. We also use third-party cookies that help us analyze and understand how you use this website. These cookies will be stored in your browser only with your consent. You also have the option to opt-out of these cookies. But opting out of some of these cookies may affect your browsing experience.
Necessary Always Enabled
Necessary cookies are absolutely essential for the website to function properly. This category only includes cookies that ensures basic functionalities and security features of the website. These cookies do not store any personal information.
Non-necessary
Any cookies that may not be particularly necessary for the website to function and is used specifically to collect user personal data via analytics, ads, other embedded contents are termed as non-necessary cookies. It is mandatory to procure user consent prior to running these cookies on your website.
SAVE & ACCEPT
The First American Psychos?Articles, books, Case Study, Education, history, Murder, Non-fiction, Uncategorized, Writing, writing
The murders that made the NYPDArticles, books, Business, Case Study, crime, history, non fiction, Non-fiction, writing, Writing