Jeremiah Meehan wrote to me from New York to say how much he enjoyed reading The Devil’s Half Mile whilst tracking the progress of Justy, Kerry, Lars et al on the map inside the cover of the book … except that he is reading the soft cover version, which makes said tracking somewhat tricky. He suggested I might post the map here, to make the tracking easier. 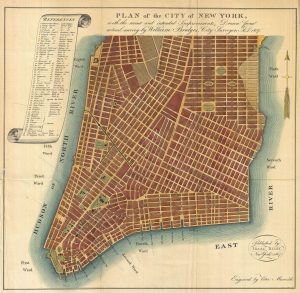 What a great idea! So, Jeremiah (and by the way, what an excellent name that is. We’ll have to talk about me stealing it for a book in the future), herewith an easily navigable map to help you on your travels.

This map was apparently published in 1807, and it is wildly speculative. It’s also a blatant piece of plagiarism. You can see that it is attributed to one William Bridges, who was a New York City surveyor, but one who was notorious for cribbing (if not outright copying) the work of his peers. In this case that meant Joseph Mangin, who was one of two surveyors commissioned in 1797 by the New York Common Council to produce a plan of the existing city.

Mangin and his co-surveyor, Casimir Goerck, overstepped their remit in a big way. In 1799, Mangin presented the Common Council with a draft map of “the City … such as it is to be…” In other words, what he thought New York could and should become, were the entire island of Manhattan to be leveled and built upon. The original Mangin-Goerck map was engraved and formally presented to the Common Council in 1803. There is a copy of the original in the New York Public Library, about which we reported a couple of stories on NPR’s Planet Money a couple of years ago.

Just to give you a sense of how speculative (or visionary) Mangin’s map was, consider that when it was made, Canal Street was still a stream, and the area around it a putrid marshland prone to flooding. The area around Center Street and Worth Street was a large and polluted freshwater pond called The Collect. The city was built up to about Leonard Street by 1803, the year Hudson’s Kill is set in, although there were many settlements north of the growing city. Note Aaron Burr’s house located north of Canal, and Newgate prison, established on the shore of the Hudson near Greenwich Village in 1797.

Mangin’s map was scorned by the Council, and shelved. But in 1811, a new map called the Commissioner’s Plan was produced to great fanfare. It looked almost identical to the Mangin-Goerck Map, and became the blueprint for the development of Manhattan Island. A handful of street names aside, it is remarkable how prescient Joseph Mangin turned out to be.

This website uses cookies to improve your experience while you navigate through the website. Out of these, the cookies that are categorized as necessary are stored on your browser as they are essential for the working of basic functionalities of the website. We also use third-party cookies that help us analyze and understand how you use this website. These cookies will be stored in your browser only with your consent. You also have the option to opt-out of these cookies. But opting out of some of these cookies may affect your browsing experience.
Necessary Always Enabled
Necessary cookies are absolutely essential for the website to function properly. This category only includes cookies that ensures basic functionalities and security features of the website. These cookies do not store any personal information.
Non-necessary
Any cookies that may not be particularly necessary for the website to function and is used specifically to collect user personal data via analytics, ads, other embedded contents are termed as non-necessary cookies. It is mandatory to procure user consent prior to running these cookies on your website.
SAVE & ACCEPT
Hudson’s Kill goes on the roadUncategorized